The Madness of John McCain 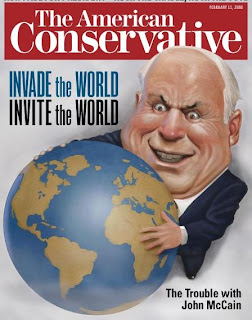 A militarist suffering from acute narcissism and armed with the Bush Doctrine is not fit to be commander in chief.

".....One can well imagine the appreciative laughter, albeit tinged with an undertone of nervous uncertainty at the sight of someone who gets far too much pleasure out of being in the spotlight. Such narcissism, unseemly in anyone, is especially unbefitting in a president, yet it is key to understanding McCain’s evolution from conventional Republican realist to relentless interventionist....

If opportunism married to an inflated ego birthed his persona as the Ares of America’s political pantheon, then this psycho-political pathology soon found expression as a full-blown delusional system. By 1999, in defense of Clinton’s war, McCain was declaring, “I think the United States should inaugurate a 21st-century policy interpretation of the Reagan Doctrine, call it rogue state rollback, in which we politically and materially support indigenous forces within and outside of rogue states to overthrow regimes that threaten our interests and values.”.....

But “straight talk” has increasingly turned to reckless talk: on the campaign trail, he was caught on video singing “Bomb, bomb, bomb Iran” to the tune of “Barbara Ann”—not one of his better moments. With his presidential campaign in the doldrums, and Giuliani and the rest of the Republican pack stealing much of his thunder, a new extremism seemed to possess him: in answer to repeated questions from one antiwar voter, McCain told a town-hall meeting in Derry, New Hampshire that the United States could stay in Iraq for “maybe a hundred years” and that “would be fine with me… as long as Americans aren’t being killed or injured” in any great numbers, as in Korea......