The answer is always Clausewitz 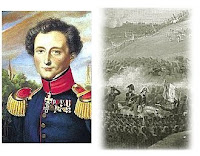 "The wry and oft-repeated saying among senior American military officers is always good for a laugh: “no matter what the question,” they claim, “the answer is always Clausewitz.” Unlike many war theoreticians, Prussian Major General Carl von Clausewitz actually served in the military–fighting Napoleon and spending time in a French prison. He was released in time to witness Wellington’s British squares crush Bonaparte’s Imperial Guard at Waterloo. His “On War” was published posthumously. For nearly two hundred years, Clausewitz’s work has retained its power. It was studied by Mao, was carried in the knapsacks of Vietnamese soldiers at Dien Bien Phu, was required reading among Saddam Hussein’s senior commanders.

We have Clausewitz to thank for German militarism: the Prussian army wasn’t really an army until he came along–its officer corps took pride in the length of their ponytails and scoffed at the notion that they should actually command troops. The Germans have since discarded Clausewitz’s most trenchant lessons: surveying the ruins of their cities in the wake of the last European war, they relegated “On War” to the dustbin of German history. Not so with America’s officers, for whom “On War” is viewed with the same awed faith that believing Christians reserve for the Nicene Creed. America’s commanders talk of war’s “fog”, its “friction” and the “strategic center of gravity”–all from the lexicon of the Clausewitz catechism......."
Posted by Tony at 6:20 AM