AN URGENT APPEAL TO HELP BREAK THE SIEGE OF GAZA 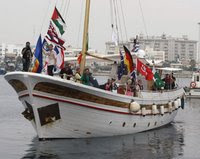 ".....On 30 December 2008 the DIGNITY was rammed by the Israeli navy while on a mission of mercy to deliver critically needed medical supplies and doctors to the war-ravaged Gaza Strip. Thanks to the heroic efforts of its captain and crew, the DIGNITY was able to find safe harbor in Lebanon, later making its way to Cyprus for repairs. Early this morning we received a call from the Harbor Master in Larnaca, informing us that the ship was taking on water. While attempting to tow her to safety, the ship went down. An inquiry has begun into the circumstances surrounding her demise, possibly due to storm damage suffered during the night...."
Posted by Tony at 6:21 AM