Environment Emerges as a Major Casualty 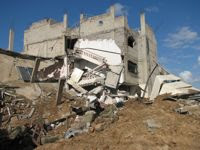 "GAZA CITY, May 4 (IPS/IFEJ) - Countless fruit groves across the Gaza Strip are now gone, entire farms bulldozed. The remains of thousands of destroyed homes emit toxic asbestos, while dilapidated infrastructure dumps raw sewage into the Mediterranean Sea. An already deepening environmental crisis in the besieged Gaza Strip has been further compounded by the recent war.

According to a preliminary assessment of environmental and infrastructural damage made by the United Nations Development Programme (UNDP), Israel's assault not only exacerbated Gaza's existing hazards, but created new ones by contaminating both land and urban environments and leaving unprecedented amounts of debris in its wake........"
Posted by Tony at 3:48 AM