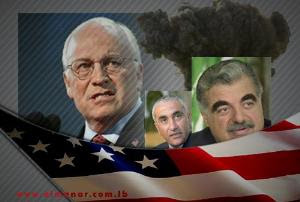 "06/05/2009 Dick Cheney, the name that always pops up whenever there is talk about a serious crime someplace in the world.
Well, Cheney had his own death squad CIA unit which he ran from the white house. By Cheney’s orders, the assassinations unit killed former Lebanese minister and Lebanese Forces chief Elie Hobeika on the 24th of January 2002 and former Prime Minister Rafik Hariri on the 14th of March 2005, prominent investigative journalist Wayne Madsen said.

Madsen who is known for his close ties with active circles in the CIA, was speaking to the Russia Today television when he revealed that the same squad that had assassinated Hobeika in coordination with former Israeli PM Ariel Sharon’s office, had also assassinated Hariri......."
Posted by Tony at 6:26 AM