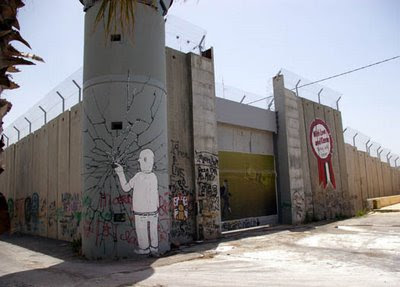 "As reported in today's Guardian, the military chokehold on Bethlehem is depriving the city of oxygen, restricting its ability to grow either physically or economically. With every passing year, the occupation's continuation wreaks more destruction on every facet of Palestinian society, and Bethlehem's plight is merely a microcosm of the larger malaise that afflicts those trapped in the West Bank and Gaza.
At the same time, Israel's insistence on hermetically sealing off Bethlehem from Israel's land (and, more importantly, its citizens), means that in the collective Israeli psyche, Bethlehem is simply another no-go zone, left to fester out of sight and out of mind. What was once an important crossroads between Israeli and Palestinian trade has, thanks to the concrete slabs of the separation wall, been relegated to the status of a leper, cast outside the camp with no end in sight to the ostracism........"
Posted by Tony at 3:22 AM