Obama does his Bush impression 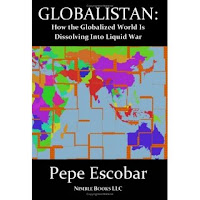 "This week's summit between United States President Barack Obama and Afghan President Hamid Karzai and President Asif Ali Zardari of Pakistan was less about saving lives than it was about rhetorically re-inventing - and physically relocating - the past administration's "global war on terror". The question is: how far will the three leaders go to wipe out al-Qaeda in Afghanistan or halt the Predator drone war?......

History once again does repeat itself as farce: in fact the only sticking point between the Taliban and Washington is still the same as in August 2001 - pipeline transit fees. Washington wouldn't give a damn about sharia law as long as the US could control pipelines crossing Afghanistan and Balochistan.

Yes, Pipelineistan rules. What's a few ragged Pashtun or Balochis in Washington's way when the New Great Game in Eurasia can offer so many opportunities? "
Posted by Tony at 6:45 AM