"Dozens of Afghan civilians have been killed in what may be one of the deadliest US bombings of Afghanistan to date. We go to Kabul to speak with Jessica Barry of the International Committee of the Red Cross in Kabul....."

You can also read this from Reuters: 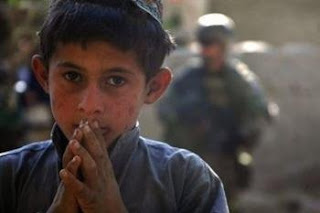 An Afghan boy looks on as French soldiers search a house in Kapisa province, Afghanistan in February 2009. Dozens of people including women and children were killed in US-led coalition air strikes in western Afghanistan, the International Committee of the Red Cross said on Wednesday.
Posted by Tony at 9:03 AM