Who Will Stop the AIPAC Jews Before it is Too Late? 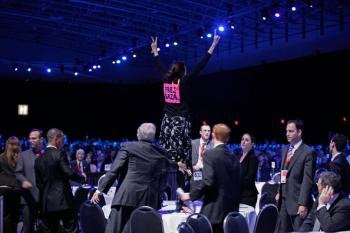 "While I was being tackled by security guards at Washington's Convention Center during the AIPAC conference for unfurling a banner that asked "What about Gaza?," my heart was aching. I wasn't bothered so much by the burly guards who were yanking my arms behind by back and dragging me-along with 5 other CODEPINK members-out of the hall. They were doing their job.

What made my heart ache was the hatred I felt from the AIPAC staff who tore up the banner and slammed their hands across my mouth as I tried to yell out: "What about Gaza? What about the children?"

What makes my heart ache is thinking about the traumatized children I met on my recent trip to Gaza, and how their suffering is denied by the 6,000 AIPAC conventioneers who are living in a bubble-a bubble where Israel is the victim and all critics are anti-Semitic, terrorist lovers or, as in my case, self-hating Jews......"
Posted by Tony at 1:33 PM