The Two-State Solution: the Pacifier Slogan 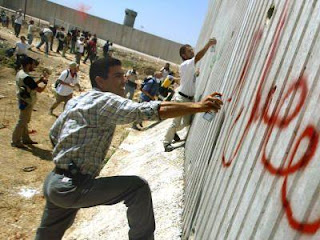 "....Obama is following Bush administration’s policy of dividing the Palestinians into moderates and extremists and talking only to those Bush called moderates. President Obama caved to the pro-Israel lobby in Washington by withdrawing the nomination of his choice as head of the NSC, Charles Freeman, because he does not support the Israeli right wing extremists’ agenda. The US under Obama continues to use the “two-state” solution phrase only as a pacifier slogan for the Palestinians and their supporters.

The irony is that, despite the fact that it was Israel that destroyed the Palestinian society, colonized and confiscated their land then refused to consider the Palestinians and Arab peace overtures, the Israeli governments and their supporters in the US succeeded over the years in presenting the Arabs and the Palestinians as intractable enemies, warmongers, hell-bent on Israel’s destruction."
Posted by Tony at 4:10 AM