Can Bibi Force Abbas to ‘Recognize’ an Oxymoron? 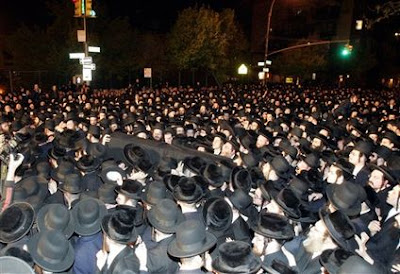 Satmar Hasidim, burying their rebbe: If they don’t recognize Israel as a “Jewish State”, why should the Palestinians?

"In his own version of the evasion game that has become tradition for Israeli leaders when pressed by the U.S. and others to conclude a two-state peace agreement, Bibi Netanyahu has insisted that before he’ll talk to Mahmoud Abbas, the PLO Chairman would first have to recognize Israel as a “Jewish State” and “the national home of the Jewish people”.