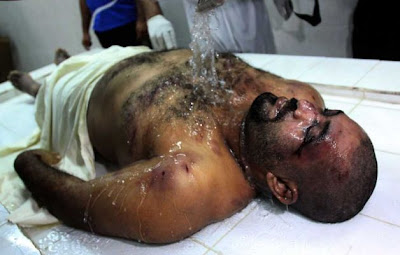 "(Manama) - Bahrain's public prosecutor should investigate three deaths in custody reported since April 3, 2011, and hold accountable anyone found responsible for torture, ill-treatment, or denial of medical care, Human Rights Watch said today. Human Rights Watch observed the body of one of the three men, Ali Isa Ibrahim Saqer, which bore signs of horrific abuse. Human Rights Watch also called on the government to disclose the whereabouts of detainees, permit them to contact their families and lawyers, and open detention centers to independent inspection. As of April 6, the opposition Wifaq National Islamic Society had collected names of 430 people who relatives say have been arrested since demonstrations began on February 14. "It's outrageous and cruel that people are taken off to detention and the families hear nothing until the body shows up with signs of abuse," said Joe Stork, deputy Middle East director at Human Rights Watch. "The authorities need to explain why this is happening, put a stop to it, and hold anyone responsible to account."....."
Posted by Tony at 8:01 AM