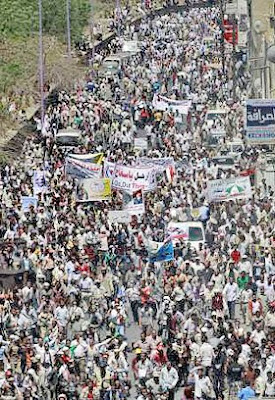 "Sana'a - Hundreds of thousands of anti-regime protesters rallied Wednesday afternoon in the capital Sanaa, demanding President Ali Abdullah Saleh's ouster and denouncing the use of force against protesters nationwide. The protesters chanted slogans including 'Oh Ali, leave, leave,' 'It's your turn' and 'Our protests are peaceful.' Another march was held Wednesday evening in the streets of the south Yemen port city of Aden, calling on Saleh to step down. The demonstrators condemned the pro-government attack on protesters Wednesday morning in Aden, which claimed the lives of two people and injured 11. Rallies were held Wednesday in at least 10 of Yemen's 20 provinces, all calling for the ouster of Saleh after 32 years in power....."
Posted by Tony at 7:20 AM