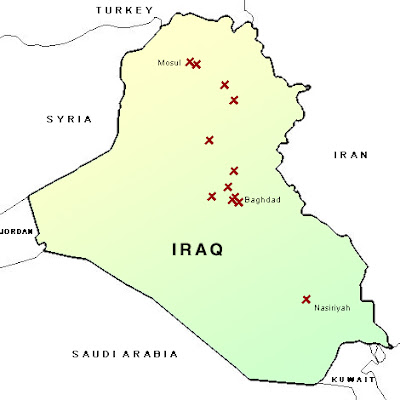 Permanent US Military Bases in Iraq.
Eternal recurrence in US foreign policy

"Remember how we were supposed to leave Iraq in 2011? Indeed, a great many people think we’ve already left, what with that official “withdrawal” announced by the Obama administration and its media amen corner in August of last year. Recall that MSNBC breathlessly reported the “end of the US mission” and even interviewed what was purported to be the last US fighting brigade on its way out of the country. Of course it was all just public relations theater: the 50,000-plus troops still there were simply redefined as “non-combat” troops – a linguistic fig leaf for a logical impossibility. And now, we have Defense Secretary Robert Gates and the Pentagon hinting very strongly that we’ve changed our minds and aren’t leaving after all. The Iraqis aren’t too happy about this, with some of them going out into the streets and demanding the US live up to its agreement and go already....."
Posted by Tony at 7:38 AM