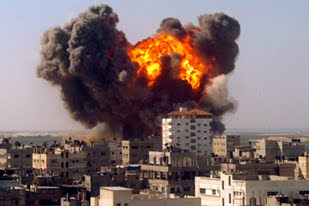 By Jody McIntyre
The Independent

"....It seems that the Israeli government momentarily took Richard Goldstone’s comments last month as a green-light for a renewed attack on the Gaza Strip. Goldstone had said that he regretted some aspects of the report he made on Operation Cast Lead, during which around 1400 Palestinians and 13 Israelis died. Four of the Israelis were killed by other Israeli soldiers in ‘friendly fire’ incidents. The Goldstone Report concluded that individual Israelis could be held criminally responsible for potential war crimes committed by the State of Israel. But now, Goldstone, a supporter of Israel – perhaps a strange choice for an ‘impartial’ report on a war launched by Israel – has said subsequent Israeli military reports show that Israel did not target civilians as a matter of policy. Oh, Israeli military reports, that infamous source of unbiased and accurate information....

Goldstone’s recent comments were roundly condemned by the other three members of the UN fact-finding mission which authored the report – Pakistani human rights lawyer Hina Jilani; Christine Chinkin, professor of international law at the London School of Economics; and Travers. But even if they were true, it is very telling that the Israeli government celebrate an opinion that civilians were not ‘intentionally’ targeted as some kind of justification for their crimes. The facts remain; they were civilians, and they were killed by the Israeli military. It is important that the Israeli government are made aware that the eyes of the world are on Palestine. We will refuse to be silent; after all, as Desmond Tutu once said, “If you are neutral in situations of injustice, you have chosen the side of the oppressor.” We must make abundantly clear which side we are standing on."
Posted by Tony at 6:30 AM