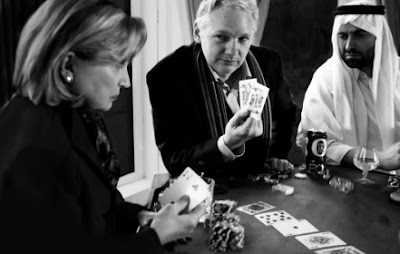 We shouldn’t be surprised by the war on WikiLeaks. The elite have always loathed the radical press, from English civil war news books to early American labour newspapers.

"Once, at the time of a major popular upheaval, elites on different sides of the political divide feared the general population more than each other. The rising merchant classes may have opposed the more traditional, aristocratic nobility, but both sides feared the radical publishers who were stirring up the people past a point of no return.....

In the long view of history, WikiLeaks is part of an honourable tradition that expands the scope of freedom by trying to lay "all the mysteries and secrets of government" before the public. We are, in a sense, a pure expression of what the media should be: an intelligence agency of the people, casting pearls before swine."
Posted by Tony at 4:50 AM