Barack Obama must speak out on Bahrain bloodshed 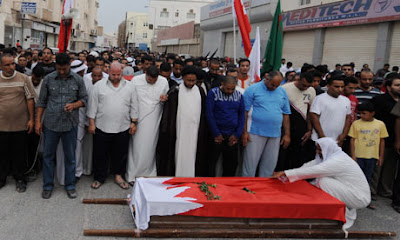 Bahrainis are suffering the same violent repression as Libyans – so why does Obama have nothing to say?

".....One month into the uprising, Saudi Arabia sent military and police forces over the 16-mile causeway that connects the Saudi mainland to Bahrain, an island. Since then, the protesters, the press and human-rights organisations have suffered increasingly violent repression. One courageous young Bahraini pro-democracy activist, Zainab al-Khawaja, has seen the brutality up close. To her horror, she watched her father, Abdulhadi al-Khawaja, a prominent human-rights activist, be beaten and arrested. She described it to me from Manama.... Rajab noted that democracy in Bahrain would lead to democracy in neighbouring Gulf dictatorships, especially Saudi Arabia, so most regional governments have a stake in crushing the protests. Saudi Arabia is well positioned for the task, as the recent beneficiary of the largest arms deal in US history. Despite the threats, Rajab was resolute: "As far as I'm breathing, as far as I'm alive, I am going to continue. I believe in change. I believe in democracy. I believe in human rights. I'm willing to give my life. I'm willing to give anything to achieve this goal.""
Posted by Tony at 7:11 AM