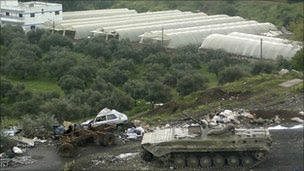 (The army has encircled Baniyas since Sunday)

Dozens of people have been injured in clashes with security forces in the Syrian port of Baniyas, where 13 people were killed on Sunday, residents say.

"Troops locked down Baniyas and stormed the nearby village of Bayda, they said. Rights groups say hundreds of people have been arrested, including several students who took part in a rare rally at Damascus University on Monday. About 200 people have died in weeks of protests against repression by President Bashar al-Assad's government...."
Posted by Tony at 1:56 PM