Bahrain: We must speak out about brutality in the Gulf 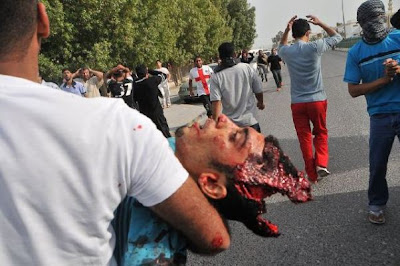 "One obvious lesson for the west from recent upheaval in the Middle East is that propping up authoritarian regimes on the grounds that they make stable allies is a terrible policy. The stability procured by despotism is an illusion. Brittle police states can contain, but never satisfy, a captive people's appetite for better lives. Eventually, they shatter and the more rigid the apparatus of repression, the more explosive the change when it comes.....

The Observer carries the chilling testimony of a young Bahraini [posted below] caught up in the small Gulf kingdom's brutal crackdown on civil dissent. It is a story that struggles to be heard as foreign media are increasingly denied access to the country and the local press is muzzled. As many as 30 people are thought to have been killed as anti-government demonstrations have been violently suppressed. Hundreds of protesters have been detained and employees have been dismissed from state-owned enterprises in a move to purge dissent....

Why does this Gulf regime get the benefit of the doubt when other authoritarian Arab rulers do not?......

There are many reasons for western reluctance to criticise Gulf rulers, but two stand out: oil and Iran.....

That is not an excuse for turning a blind eye to repression in Bahrain. The policy contortions and contradictions Britain has been forced into in recent weeks must serve as a warning. Our reliance on regimes that fear and despise democracy is no more sustainable than those regimes are themselves stable.....

Having belatedly found that voice in North Africa, it would be a strategic error and a moral failure immediately to let it fall silent in the Gulf."
Posted by Tony at 6:32 PM