Hosni Mubarak: from detention to where? 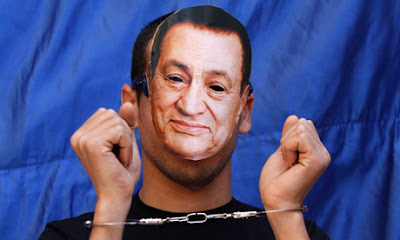 From hospitalisation to immunity pleas, the dictators of Egypt, Tunisia and Yemen will do anything to escape justice

"On Tuesday, the Egyptian ex-president Hosni Mubarak – who has been confined to a luxury villa in Sharm el-Sheikh since he was ousted – allegedly suffered a heart attack just as he was about to be questioned by prosecutors. Despite that, he is now to be detained for 15 days. Meanwhile his sons, including his former presidential heir, Gamal, have been held for questioning in Cairo by the wonderfully named Illicit Gains Authority....

By all means put the organ-grinder and his monkeys on trial, but in order to break with the past, any trials need to be meticulously fair and based on proper evidence – not some theatrical event or a diversion from the problems of the present. The important thing is not so much punishment as accountability – bringing the corruption and misdeeds of the old regime into the full light of day, detail by detail. In that way, new boundaries can be set for acceptable behaviour in government."
Posted by Tony at 7:20 AM