While the Saudi elite looks nervously abroad, a revolution is happening 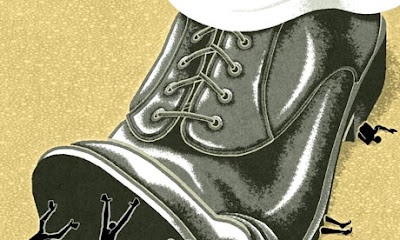 "The Saudi regime is under siege. To the west, its heaviest regional ally, the Egyptian dictator Hosni Mubarak, has been ousted. To its north, Syria and Jordan are gripped by a wave of protests which shows no sign of receding. On its southern border, unrest in Yemen and Oman rages on. And troops have been dispatched to Bahrain to salvage its influence over the tiny kingdom exerted through the Khalifa clan, and prevent the contagion from spreading to Saudi Arabia's turbulent eastern provinces, the repository of both its biggest oil reserves and largest Shia population.

Such fears of contagion no longer seem far-fetched....

Now Saudi Arabia finds itself in the eye of the Arab revolutionary storm, its religious and financial arms have been deployed to fortify the status quo. As well as made-to-fit fatwas prohibiting dissent as fitna (division and social strife) and demonstrations and pickets as forms of "insurrection against rulers", the regime has resorted to bribing its subjects in return for allegiance and acquiescence. On his return from a three-month medical trip in US, the ailing 87-year-old King Abdullah announced financial handouts worth an astonishing $129bn – more than half the country's oil revenues last year – including a 15% rise for state employees, reprieves for imprisoned debtors, financial aid for students and the unemployed, and the promise of half a million homes at affordable prices – not to mention increases to the religious police budget.

Externally the regime draws sustenance from its "special relationship" with the US. In return for keeping the oil supply steady and pouring billions into the American treasury through arms deals, the Al-Saud family gets a US commitment to complete protection.

Does this mean that the country's fate is to remain ruled by an absolutist system where the notion of the citizen is non-existent and power is monopolised by an ageing king and his clan? That is unlikely, for Saudi Arabia is not God's eternal kingdom on Earth and is not impervious to the change that is required internally and regionally. The question is not whether change is coming to Saudi Arabia, but what its nature and scope will be."
Posted by Tony at 4:35 AM