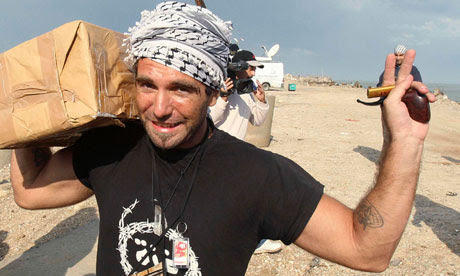 Vittorio Arrigoni in Gaza in 2008. The pro-Palestinian activist has reportedly been killed by Islamic militants.

An Italian pro-Palestinian activist has reportedly been kidnapped and killed by Islamic militants in Gaza.

The body of Vittorio Arrigoni was found in an abandoned house in the Gaza Strip on Friday following his abduction by militants, a Hamas official said.

Two men were arrested and others were being sought in the killing, the official added.

A Jihadist Salafi group in the Gaza Strip aligned with al-Qaida had threatened to execute Arrigoni by 5pm local time on Thursday unless their leader, whom Hamas arrested last month, was freed.

"A security force entered a house and they found the Italian's man body, he is dead," the source told Reuters from the scene.

What a despicable, cowardly act by this "jihadist" group! This is jihad, you cowards?

This great man has shown solidarity with the suffering and besieged people of Gaza, not only by words, but by acts. He risked his life and was on more than one of the Free Gaza Movement's voyages to break the Gaza siege.

The fact that such Salafi groups exist and thrive in Gaza is a testimony to the dark age inspired (directly and indirectly) by the reactionary Hamas movement.

While the rest of the Arab world wakes up to the sunshine of the Arab spring, these people remind us of who they are: killers from the dark ages.
Posted by thankgodimatheist at 9:10 PM