It's Arab and it's personal 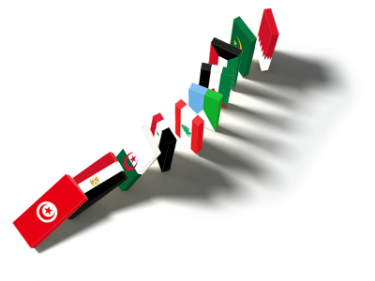 The Arab revolution puts regional and international powers on notice as it pushes for the removal of autocrats.

"The Arab revolution is on the march, and there is no turning back. Sweeping transformation is coming – sooner rather than later – but, just as Arabs realise change is a must and are making it happen with much fanfare, their regimes and many world leaders don't seem to get the message. Americans, Europeans and Israelis – like Turks and Iranians, as well as Russians and Chinese, or even Brazilian leaders – are yet to internalise the dramatic transformations in the Arab region and change their policies accordingly. They're either playing catch up, hedging their bets or are terribly indifferent to the spirit and magnitude of change at play among the Arabs.....

Considering it's been easy for Western powers to make clients out of autocrats and do good business with dictators, they are probably worried that the newly elected, accountable and transparent governments might be more resistant to their pressures and dictates. As they should. Either way, the overzealous French president Sarkozy and the hyper British prime minister Cameron, are quite eager to force their way back to the Arab region from the Libyan gate with a hope of re-dividing it into areas of influence......

Like the rest of the Arab world, Libya is in dire need not for stability but for change. Not for mending fences with its 40 year old dictatorship, but for removing the dictator and its dictatorship. Alas, some of these African leaders probably feel like they owe Gaddafi for the support Libya lent them in previous years or would rather limit Western military intervention in their continent, but that should in no way blind them for doing the right thing by the Libyan people....

Alas, complications, setbacks and contrasts among various uprisings in the Arab region are providing Arab leaders with the alibi to insist that they're "different" and that what applies to their Arab neighbours doesn't apply to them. It also gives justification for foreign powers to pursue more-of-the-same cynical zero-sum policies towards the Arab region. That's why eventually, it's up to the Arab revolution to put regional and international powers on notice as it pushes for the removal of Arab autocrats.....

The strength of the Arab revolutionaries lies not only in their defiance of dictatorship – impressive as that is – but in their cross-regional unity that pushes for change. Their power lies in the fact and reality that their revolution is Arab in its scope, Arab in its identity and pan-Arab in its geography. Whatever happens in one Arab country ends up effecting what happens in another, such as the Arab domino effect. As the Yemeni and Libyan regimes fall, as they must, the Arab revolution will once again gain momentum and global recognition as it did after changes in Egypt and Tunisia. Meanwhile, it's going to be indispensable for Arab revolutionaries to unify their slogans and goals across the region. Their pursuit for justice, human rights, freedom of expression, and freedom from want is one and the same, and must be underlined in every street and every public square and chat room......

Remember, the revolution is Arab. And it's personal."
Posted by Tony at 9:16 AM