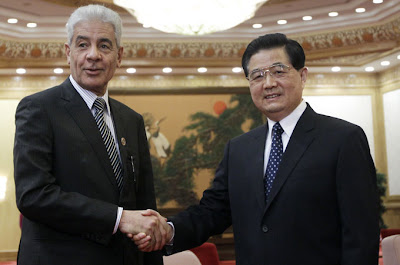 "What a sight. Chinese president Hu Jintao pulling a vintage John Lennon performance in Beijing and telling self-styled Arab liberator and French neo-Napoleonic president Nicolas Sarkozy to "give peace a chance" in Libya. The top four BRICS countries (Brazil, Russia, India, China) all abstained at the voting of UN Security Council Resolution 1973. In his subtle address to Sarkozy, Hu also implied his displeasure that the African Union, which was overwhelmingly against a foreign intervention in Libya, had their proposals totally sidelined by the West. Only three days before UN Resolution 1973 was voted on, Gaddafi met with the ambassadors of BRICS members China, Russia and India, and told them, according to the JANA news agency: "We are ready to bring Chinese and Indian companies to replace Western ones." That may go a long way to explain the BRICS abstentions.....

And then there is the social volcano inside the Middle Kingdom. Moving at lightning speed to curb the ultra-sensitive political reverberations of the great 2011 Arab Revolt – the "harmonious society" collides with the prospect of a "jasmine revolution" – the Beijing leadership condemned what it dubbed "street corner politics" which can only lead to "social chaos" and "stagnate" Chinese society. In a nutshell; China is not the Middle East, and Middle East "turmoil" does not apply to China. Instead, "happiness" has been set as the new national goal – replacing GDP growth (and, hopefully, making everyone forget about inflation, social inequality and corruption)......"
Posted by Tony at 4:01 AM