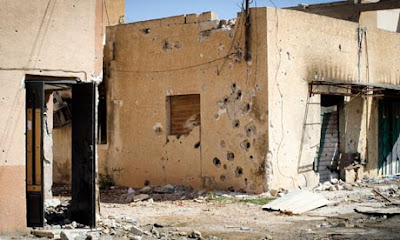 Human Rights Watch say Gaddafi's army has fired the weapons, which cause massive damage and are banned in most states

"Forces loyal to Muammar Gaddafi have fired cluster bombs into residential areas of the besieged city of Misrata, according to witnesses. Human Rights Watch reported that four cluster bombs exploded in the city on Thursday and Friday, and two Libyan residents of Misrata told the Guardian that they suspected the munitions were being used. Cluster bombs, banned by most countries in the world, explode in midair, indiscriminately throwing out dozens of high-explosive bomblets which cause widespread damage and injuries over a large area. The submunitions often fail to explode on impact but detonate when stepped on or picked up....."
Posted by Tony at 8:11 PM