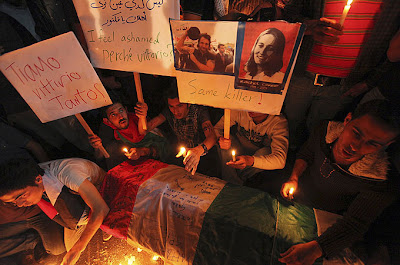 Mourners rally in the Gaza Strip for Vittorio Arrigoni, found dead after being kidnapped by an al-Qaeda-linked group.

"....There has been an outrage over the cold-blooded killing of the Italian. "I was about to cry when I heard the news. That man quit his family for us, for Gaza, and now Gazans killed him. That was so bad," Abu Ahmed, a supermarket owner, said. Samira Ali, a teacher, said: "Those who killed him are not Muslims and certainly not Palestinians." Arrigoni's kidnappers described him as a "journalist who came to our country for nothing but to corrupt people" - a charge completely rejected by activists and aid workers who knew him in Gaza. "He's very well-known, he lives among the people," said Huwaida Arraf, a co-founder of ISM. "Vit has repeatedly put his life in danger, put his life on the line in support of the Palestinians." A journalist colleague at the Italian daily Il Manifesto said he was "astounded" by Arrigoni's death. Arrigoni is the third ISM member to be killed in Gaza - US national Rachel Corrie was crushed to death by an Israeli bulldozer in March 2003, and a month later Briton Tom Hurndall was shot and critically injured by the army. He died in January 2004......"
Posted by Tony at 4:44 AM