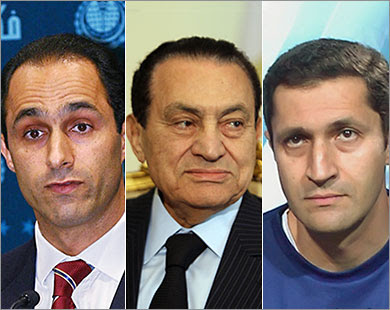 "The barbed wire fences and forbidding high walls became a horrifyingly familiar sight to those who dared speak out over the past three decades; for many of the thousands who passed through Cairo's Tora prison complex and were tortured within it, this notorious jail was the ultimate symbol of Hosni Mubarak's Egypt. On Wednesday, as it has done so many times before, Tora received two more prisoners accused of crimes against the state. Their names were Gamal and Alaa Mubarak, sons of the ousted president, and they arrived in the early hours, handcuffed and clad in standard-issue white jumpsuits. Egypt's remarkable revolution has boasted many poignant moments, but the sight of the all-powerful Mubarak family being led into the top-security cells which once housed their political opponents will count among the most memorable......"
Posted by Tony at 4:29 PM