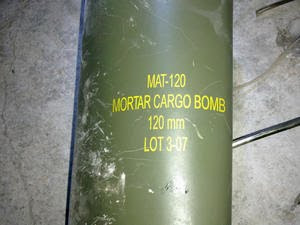 "(New York) - Government forces loyal to the Libyan leader, Muammar Gaddafi, have fired cluster munitions into residential areas in the western city of Misrata, posing a grave risk to civilians, Human Rights Watch said today. Human Rights Watch observed at least three cluster munitions explode over the el-Shawahda neighborhood in Misrata on the night of April 14, 2011. Researchers inspected the remnants of a cluster submunition and interviewed witnesses to two other apparent cluster munition strikes. Based on the submunition inspected by Human Rights Watch, first discovered by a reporter from The New York Times, the cluster munition is a Spanish-produced MAT-120 120mm mortar projectile, which opens in mid-air and releases 21 submunitions over a wide area. Upon exploding on contact with an object, each submunition disintegrates into high-velocity fragments to attack people and releases a slug of molten metal to penetrate armored vehicles. "It's appalling that Libya is using this weapon, especially in a residential area," said Steve Goose, arms division director at Human Rights Watch. "They pose a huge risk to civilians, both during attacks because of their indiscriminate nature and afterward because of the still-dangerous unexploded duds scattered about."....

The area where Human Rights Watch witnessed the use of cluster munitions is about 1 kilometer from the front line between rebels and government forces. The submunitions appear to have landed about 300 meters from Misrata hospital. Human Rights Watch could not inspect the impact sites due to security concerns....."
Posted by Tony at 4:59 AM