The "Reforms" of the Rabbit are Spreading: Syrian security forces attack village 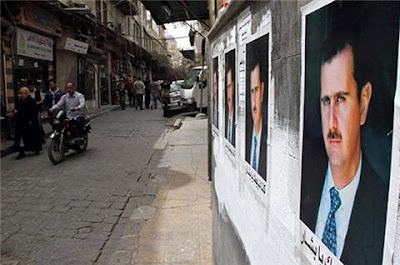 "Syrian security forces have fired upon people in the village of Baida, near the town of Baniyas in the country's northeast, injuring at least one person, witnesses have said. On Sunday, security forces in Baniyas killed at least four pro-reform protesters and left another 17 wounded, human rights groups have said. "Security forces and armed men are firing machine guns indiscriminately at [Baida]," a witness told the AFP news agency on Tuesday. "The gunfire against Baida is intense like the rain. At least one person was injured," another witness told AFP, describing the violence in the village, which is 10km south of Baniyas. "The goal of the attack is probably the arrest of Anas al-Shukri [one of the leaders of the opposition movement]," a human rights activist, who wished to remain anonymous, said. Al-Shukri told the AFP news agency that security forces and the army were "continu[ing] to assault Baniyas". The AP news agency reported that pro-government armed men were also attacking the village of Beit Jnad, near Baida, on Tuesday. Haitham al-Maleh, an opposition activist, said attackers were using automatic rifles in the two villages......"
Posted by Tony at 9:02 AM