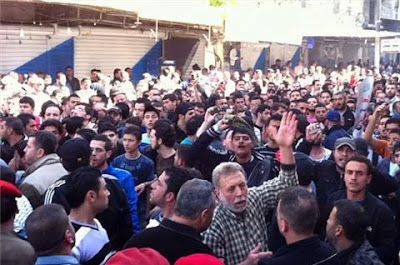 "Pro-democracy protests have taken place in several cities in Syria, a day after Bashar al-Assad, the country's president, attempted to calm mounting opposition to his rule. Around 2,500 people marched in the Syrian town of Daraa on Friday, chanting slogans calling for the "freedom" of the southern town, which has been the epicentre of protests against President Assad's rule. "Between 2,500 and 3,000 people showed up at Al-Saraya area in the centre of the city, chanting slogans in favour of freedom and against the hostile regime," a human rights activist told the AFP news agency, speaking on condition of anonymity. Protests are also under way in Baniyas, Homs, Latakia and Deir ez-Zor, as well as in the Douma suburb of the capital Damascus. Rula Amin, Al Jazeera's correspondent in Daraa, reported that the army and security forces were not visible in the city, and that the protesters were being allowed to hold their demonstration. "It's a completely different scene from last Friday when more than 26 people were killed during protests and clashes with the security forces and protesters here. Today, no security forces are visible at all. People went after the Friday prayers ... in thousands. They were marching carrying olive branches saying 'peaceful, freedom'. Some were demanding the toppling of the regime, others were saying they just want reforms," she reported......"
Posted by Tony at 6:49 AM