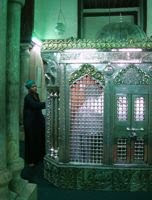 "CAIRO, Apr 15, 2011 (IPS) - Shrines venerated for centuries by Sufi Muslims have come under attack as Islamic fundamentalists seek to purge the Egyptian landscape of "heretical" artifacts that do not conform to their strict interpretation of Islam. Egyptian authorities say dozens of shrines sacred to Sufis – an esoteric branch of Islam – have been vandalised or destroyed in recent weeks by Salafists, an ultra-conservative sect that advocates a return to Islam as they believe it was practised during the religion’s earliest days. The shrines were built to commemorate Muslim saints and have played an integral role in popular religious practice for centuries. Sufis visit the holy sites to honour the saints buried there and to seek their spiritual blessings and guidance. Some of the shrines are also considered sacred to Egypt’s minority Shia Muslim population....."
Posted by Tony at 7:17 AM