A chilling account of the brutal clampdown sweeping Bahrain 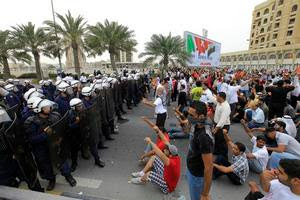 Mahmoud is a Shia who lives near Manama, Bahrain's capital. Here he tells how Saudi soldiers wage a campaign of sectarian violence as the Gulf state and its allies try to obliterate all trace of the Pearl protests

"Since the Gulf soldiers came to Bahrain, life in the Shia villages and suburbs of the capital, Manama, has been non-stop intimidation, violence and threats. Even trying to move around in normal ways has become life-threatening. They are trying to beat down the opposition with a long campaign against us......"
Posted by Tony at 1:55 PM