Bahraini woman willing to die if family is not released 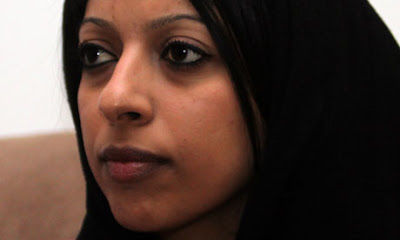 "A Bahraini woman who witnessed her father, a well-known human rights activist, being seized by masked soldiers, beaten unconscious and then taken into custody, has told the Guardian that she is willing to die on hunger strike unless he is released. Zainab al-Khawaja, 27, will today enter her fourth day without food in protest at the violent arrest and subsequent disappearance of the outspoken dissident Abdulhadi al-Khawaja, 50, along with her husband and brother-in-law. Zainab, who was brought up in exile in Denmark, is taking only water, and told the Guardian she is already feeling weak, with breast-feeding sapping her strength faster than she had expected. She says she will leave her 18-month-old child with family members if she dies.....

Zainab said yesterday: "Before they arrested people you thought, yes, they may be tortured, but you will see them again. Now you can't be sure." She added that the spate of deaths in custody appears to be a deliberate government tactic to increase fear among dissidents. "The government seems to be proud of this because they are the ones announcing the deaths." "It's outrageous and cruel that people are taken off to detention and the families hear nothing until the body shows up with signs of abuse," said Joe Stork, deputy Middle East director at Human Rights Watch. "The authorities need to explain why this is happening, put a stop to it, and hold anyone responsible to account." Amnesty International estimates the government is holding more than 400 activists over protests that began on 14 February. The Bahrain Centre for Human Rights said the number is more than 600."
Posted by Tony at 4:39 PM