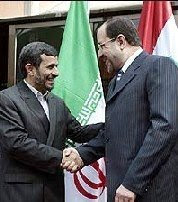 Don't Take This Report Literally, but It Is Well Worth Reading

".....Yet in Tehran, DEBKAfile’s Iranian sources report, the president’s excursion into US-occupied territory was counted as a step forward in its seven-month old secret Saudi-mediated dialogue with Washington.

This dialogue has advanced in give-and-take steps on a broad set of issues.

The most prominent is Iran’s nuclear program. The third round of UN Security Council sanctions imposed Monday, March 3, banning trade with Iran did not really bother Tehran. The penalties were predicted and anticipated. Iran’s rulers can live with a motion which they see as the Bush administration’s parting shot in the dispute over the uranium enrichment issue. Not surprisingly Israel was not satisfied.....

What does the Bush administration expect from Tehran?

According to our Washington sources, George W. Bush is keen to hand his successor a relatively stable Iraq where the violence spiral sustains its downward curve. The US president accordingly stopped direct US military action against pro-Iranian Shiite “special groups,” in the expectation that Tehran will use its influence to keep Iraq on a relatively even keel for the remainder of his term in office.

The quid pro quo runs like this: Tehran is bidding for an understanding with Washington on its nuclear program, while the US is after Iran’s help to preserve the status quo in Iraq.

Iran has two powerful resources for delivering the goods:

1. An extensive clandestine intelligence and military infrastructure across Iraq that will obey Tehran’s orders to pull in its horns.

2. Tehran’s hand on the spigot of the flow of weapons, money and extra-powerful roadside bombs to the different anti-US insurgent groups.

DEBKAfile’s military sources in Iraq report that this flow has been slowed at times but never allowed to dry up. Up until the fall of 2007, pro-Iranian groups received a sufficiency of war materiel to mount attacks on US forces. Today, it is down to a trickle, just enough for the Revolutionary Guards to keep their hand in with those militias.

The third key issue dominating the US-Iranian dialogue is southern Iraq and its oil. This is also pivotal for Iran’s bilateral relations with Iraq.

Ahmadinejad’s hosts in Baghdad have to live with the realization that their guest has more clout with the Shiites of southern Iraq than the Maliki government.

The shrine-cities of Karbala and Najef and the oil port of Basra. Iran and the radical Iraqi Shiite cleric Moqtada Sadr at the head of his Mehdi Army militia divide control of these three cities between them.

If the central government wants any say in southern Iraq, it must stay on good terms with both its rival masters.

During his last visit to Tehran at the end of last year, prime minister al-Maliki signed an agreement to lay a pipeline taking Iraqi oil to Iranian refineries in Abadan. This was a bid to link southern Iraq’s oil to the Iranian oil fields and installations on the eastern bank of the Shatt al-Arb opposite Basra. The Americans, who control and defend the southern oil fields, let the agreement go through, although they are in competition against Iran in Central Asia and Turkey. The Bush administration is reconciled to including southern Iraq and its oil fields in the overall package of Iraq understandings with Tehran.

This package the White House is willing to hand over to the next president as long as the status quo is preserved in that part of Iraq too."
Posted by Tony at 6:26 AM