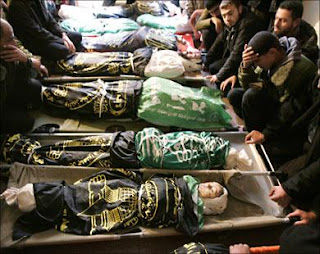 "2008 marks the 20th anniversary of Hamas as a political movement in Palestine, involving two decades of continuous struggle against Israeli occupation. Most importantly, Hamas has confronted not just the Middle East's most powerful army, equipped with state of the art weaponry and nuclear arms, but also the most powerful Western countries. These have supported Israel, completely contravening international law in relation to the Occupation. In addition, Hamas has been abandoned to its fate by neighbouring Arab regimes.

In spite of this, since its beginning in1988, Hamas has grown year after year until, in January 2006, it won the legislative elections in the Occupied Territories. It is reasonable to conclude that this popular validation confirms beyond doubt that the Palestinian people support the political programme of Hamas to end Israeli occupation of their land.

It is also a sign of appreciation for Hamas' impressive record of service: resistance in front of Occupation aggression, honesty in political management, concern for the most deprived people and efforts to achieve national and political unity......."
Posted by Tony at 3:56 PM