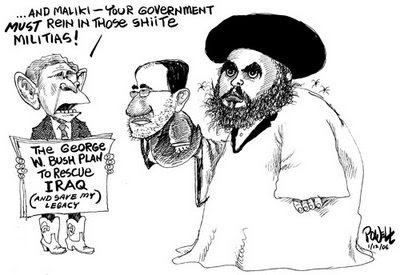 "BAGHDAD—Iraq's elusive Shiite cleric Moqtada Sadr has decided to drop out of politics for the time being because his disillusionment with the political scene in Iraq has left him sick and anxious, he said in an unusually personal letter to his followers released Friday.

In a written response to a query from a group of followers asking why he hadn't been seen in public for so long, Sadr said he had decided to devote himself to a period of study, reflection and prayer after failing in his core mission to rid Iraq of the U.S. occupation or to turn it into Islamic society.

He also cited the betrayal of some of his followers, whom he accused of falling prey to "materialistic" politics.

"So far I did not succeed either to liberate Iraq or make it an Islamic society – whether because of my own inability or the inability of society, only God knows," he wrote.

"The continued presence of the occupiers, on the one hand, and the disobedience of many on the other, pushed me to isolate myself in protest.

"I gave society a big proportion of my life. Even my body became weaker, I got more sicknesses and more anxiety."

Speculation has been intensifying as to the whereabouts of the maverick cleric, whose Mahdi Army militia twice fought the U.S. army in 2004 and then was accused of many of the sectarian killings of Sunnis that pushed Iraq to the brink of civil war.

His last public statement came two weeks ago, when he renewed the 6-month cease-fire that has been credited with helping bring down the levels of violence in Iraq.

But he has not been seen in public since last May. Sadrist officials said in January that he was studying to become an ayatollah in the holy city of Najaf, a position that would give the 30-something leader greater religious authority over the movement he inherited from his slain father. The U.S. military and some Iraqi officials say he is living in the Iranian city of Qom....."
Posted by Tony at 6:08 AM