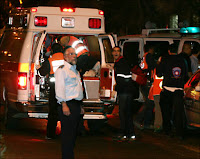 "In an apparent retaliation for the recent Israeli massacres in the Gaza Strip, (or the assassination in Damascus by Israeli agents last month of Imad Mughniya, a leading Hizbullah figure) unidentified guerillas on Thursday attacked the headquarters of the religious messianic Zionist movement in West Jerusalem, killing and injuring a number of settlers and soldiers.

According to Israeli media reports, at least six settler-soldiers were killed and several others wounded. At least one Palestinian guerilla was killed.

There was a lot of gunfire and hysteria," a woman who lives across the street from the school told the radio. There was no immediate claim of responsibility.

The shooting, which was highly expected, is believed to be a revenge attack for the killing by the Israeli army this week of more than 120 Palestinians, the vast bulk of them innocent civilians, including more than 13 children and toddlers.

Mirkaz Ha’rav, which literally means “the Center of the Rabbi” is a Talmudic college which combines religious education with active military service.

The center is considered the “central nervous system” of the Jewish settler movement, known as Gush Emunim, or “block of the faithful.” It also issues usually extreme religious edicts which permit Israeli soldiers to kill innocent Palestinian civilians, including children.

One of the prominent rabbis affiliated with Mirkaz Ha'rav is Dove Lior, the settler Rabbi of Kiryat Arba. On Wednesday, Lior was quoted as saying that it is permissible for the Israeli army to kill Palestinian civilians, including children.

The Gush Emunim movement adopts the messianic teachings postulated by Rabbi Avraham Kook who viewed the creation of Israel in Palestine as heralding the beginning of the messianic age and the appearance of the Messiah or Redeemer.

Messianic Zionists also believe that Jews ought to try to induce and expedite the process of redemption by carrying out acts of violence and bloodshed against the Palestinians in order to generate turbulence and war, an environment they believe would expedite the appearance of the Messiah.

The heads of the Mirkaz Ha’rav vehemently oppose peace between Israel and the Palestinians and are strongly against the creation of a Palestinian state in the West Bank, East Jerusalem and the Gaza Strip.

Gush Emunim and religious Zionism in general are represented in the Israeli Knesset by a party called “Ha’a Mifdal” a Hebrew acronym meaning “the National Religious Party.”

The party advocates ethnic cleansing and or enslavement of the Palestinians as water carriers and wood hewers based on Biblical principles.

It is widely believed that a large percentage of the Israeli army’s high-ranking officers are affiliated with the religious Zionist movement."
Posted by Tony at 3:14 PM