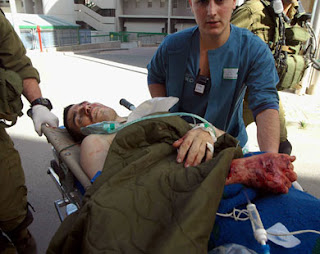 "GAZA, (PIC)-- An IOF soldier was killed on Thursday after Palestinian resistance elements detonated an explosive device in an IOF jeep near the Kissufim military position east of Khan Younis, south of the Gaza Strip.

Hebrew media reported that the soldier was killed while others were wounded in the attack. Eyewitnesses in the area said that jeep was directly hit and completely destroyed by the ensuing fire.

An eyewitness told PIC correspondent that the blast directly exploded in the jeep putting it on fire.

He added that the blaze continued for 15 minutes before a number of IOF armored vehicles arrived to the scene accompanied by a military ambulance vehicle and a helicopter to evacuate the casualties.

Violent clashes were reported in the area between IOF troops and resistance fighters during which the IOF troops fired at civilian neighborhoods, locals reported.
The Quds Brigades, the armed wing of the Islamic Jihad Movement, took credit for the attack."
Posted by Tony at 4:03 AM