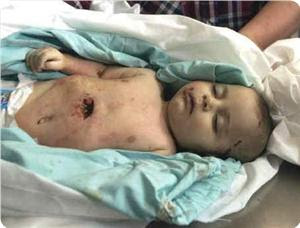 "Holocaust is the genocidal crime against people based on their ethnicity. This genocide could be perpetrated through different means such as poison gas, guns, tanks, air raids, biological warfare, economical siege, starvation, destruction of vital natural resources, eviction into desert, and deprivation of basic vital materials among others, to produce the same result; mass deaths. For the last sixty years Palestinians have been suffering from all these methods in a deliberate programmed holocaust. The perpetrators are not Nazis, but those who claim to be survivors, and their descendents, of Nazi-caused holocaust; Zionist Jewish Israelis.

The threat of Israeli Deputy Defense Minister, Metan Vinai, to inflict “bigger Shoah” (Holocaust) [British Telegraph 2/29] on Gaza’s Palestinians reflect the adopted policy of the Israeli government towards Palestinians. Encircled by 8 foot high cement wall on three sides and a sea filled with hostile Israeli gun boats on the fourth, Gaza, with a dense population of 1.5 million people, has become the largest concentration camp ever on this globe. Israeli army is the prison guards of this concentration camp.....

Fearing the angry reactions of huge Arab and Islamic populations and indignation of international community Israel is perpetrating a graduated Palestinian holocaust, where murdering Palestinians had become a daily occurrence in an attempt to desensitize world opinion. Yet this Palestinian holocaust has all the ugly features of European Jewish holocaust. Where European Jews had suffered from a social racial superiority ideology of the pure Aryan race the Palestinians are suffering from a more extreme religious superiority ideology of God’s chosen people.....

Israeli expansion policy is a twin sister of Nazi “Lebenraum” policy of creating what they called more living space for God’s chosen people. Using Hitler’s own words this policy was expressed by the Israeli President, Shimon Peres, stating: “We need more room to breathe”, of course on the expense of Palestinians. Zionism is Nazism incarnate.

The Zionist leaders’ justification for allowing the Jewish holocaust to continue was that “The European Jews must accede to suffering and death greater in measure than the other nations in order that the victorious allies agree to a Jewish state at the end of the war” (5). I wonder what is the Arab leaders’ justification for allowing the Palestinian holocaust to continue."
Posted by Tony at 8:11 PM