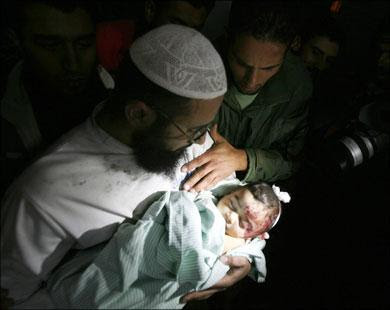 The Palestinian people have long realized that the so-called "peace process" does not challenge or change the long-held status quo, nor will it allow them to exercise their national and political rights. Whether Sharon, Barak or Olmert, the Israeli position is crystal clear: NO return to the borders of June 4, 1967, NO dismantling of Jewish settlements, NO return of Palestinian refugees, NO backing down on Jerusalem as 'the undivided, eternal capital city of Israel, and NO sovereign, independent Palestinian state with its own military on the western bank of the Jordan river. The best that is on offer is a Bantustan, a reservoir for the Natives.

"Peace" within this context has led to more misery for the mere reason that it lacks justice. Palestinians get punished for being shot; for trying to protect themselves, and mostly, for just being where they are, as though they should not be there in the first place. Hence, the unprecedented brutality, the shelling with heavy artillery - what Joseph Conrad's Kurtz calls 'The horror! The horror!'- the horror that embodies itself in the faces of Mohammed, Safaa, Jacqueline, and the rest of those children who lost their lives in Matan Vilani's death chambers. "The Holocaust! The Holocaust!""
Posted by Tony at 10:06 AM