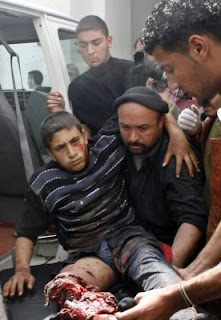 Washington's covert attempts to overturn an election result lie behind the crisis in Gaza, as leaked papers show

"attempt by western politicians and media to present this week's carnage in the Gaza Strip as a legitimate act of Israeli self-defence - or at best the latest phase of a wearisome conflict between two somehow equivalent sides - has reached Alice-in-Wonderland proportions. Since Israel's deputy defence minister, Matan Vilnai, issued his chilling warning last week that Palestinians faced a "holocaust" if they continued to fire home-made rockets into Israel, the balance sheet of suffering has become ever clearer. More than 120 Palestinians have been killed in Gaza by Israeli forces in the past week, of whom one in five were children and more than half were civilians, according to the Israeli human rights group B'Tselem. During the same period, three Israelis were killed, two of whom were soldiers taking part in the attacks.......

The US, however, is resolutely opposed to negotiating with what it has long branded a terrorist organisation - or allowing anyone else to do so, including other Palestinians. As the leaked American papers confirm, Rice effectively instructed Abbas to "collapse" the joint Hamas-Fatah national unity government agreed in Mecca early last year, a decision carried out after Hamas's pre-emptive takeover. But for the Palestinians, national unity is an absolute necessity if they are to have any chance of escaping a world of walled cantons, checkpoints, ethnically segregated roads, dispossession and humiliation.

What else can Israel do to stop the rockets, its supporters ask. The answer could not be more obvious: end the illegal occupation of the Palestinian territories and negotiate a just settlement for the Palestinian refugees, ethnically cleansed 60 years ago - who, with their families, make up the majority of Gaza's 1.5 million people. All the Palestinian factions, including Hamas, accept that as the basis for a permanent settlement or indefinite end of armed conflict. In the meantime, agree a truce, exchange prisoners and lift the blockade. Israelis increasingly seem to get it - but the grim reality appears to be that a lot more blood is going to have to flow before it's accepted in Washington."
Posted by Tony at 8:40 PM