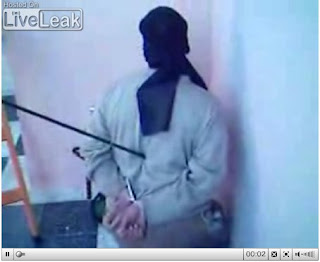 "In its latest issue, Vanity Fair reports that the White House tried to organize the armed overthrow of the Hamas-led goverment after Hamas swept Palestinian elections two years ago. According to the article, the Bush administration lied to Congress and boosted military support for rival Palestinian faction Fatah in the aim of provoking a Palestinian civil war they thought Hamas would lose. Vanity Fair dubbed the episode “Iran Contra 2.0”—a reference to the Reagan administration’s funding of Nicaraguan Contras by covertly selling arms to Iran. We speak with David Rose, the journalist who broke the story......

WATCH THE TORTURE VIDEO: Here is the video of torture by the Dahlan thugs referred to at the beginning of the Vanity Fair report and mentioned by David Rose. This video was posted on Palestinian Pundit on June 21, 2007

Click Here to Watch Video
Posted by Tony at 11:32 AM