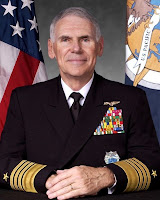 Admiral Fallon and His Empire
By CHRIS FLOYD
CounterPunch

"There has been quite a buzz in "progressive" circles over the new Esquire article about Admiral William Fallon, head of U.S. Central Command, the military satrapy that covers the entire "arc of crisis" at the heart of the "War on Terror," from east Africa, across the Middle East, and on to the borders of China. Much has been made of Fallon's alleged apostasy from the Bush regime's bellicosity toward Tehran; indeed, the article paints Fallon as the sole bulwark against an American attack on Iran – and hints ominously that the good admiral may be forced out by George W. Bush this summer, clearing the way for one last murderous hurrah by the lame duck president. The general reaction to the article seems to be: God preserve this honorable man, and keep him as our shield and defender against the wicked tyrant.

But this is most curious. For behind the melodramatic framing and gushing hero-worship of the article – written by Thomas Barnett (of whom more later) – we find nothing but a few mild disagreements between Fallon and the White House over certain questions of tactics, timing and presentation in regard to American domination of a vast range of nations and peoples......

No, what is most noteworthy about the article is that Barnett has given us, unwittingly, one of the clearest pictures yet of the true nature of the American system today. And that system is openly, unequivocally and unapologetically imperial, in every sense of the word, and in every sinew of its structure. For what is Fallon's actual position? We see him commanding vast armies, both his own and those of local proxies, waging battles to bend nations, regions and peoples to the will of a superpower. We see him meeting with the heads of client kingdoms in his purview, in Cairo, Kabul, Baghdad, Dushanbe: advising, cajoling, demanding, threatening, wading deeply into the internal affairs of the dominated lands, seeking to determine their politics, their economic development, their military structure and foreign policies......"
Posted by Tony at 8:39 AM