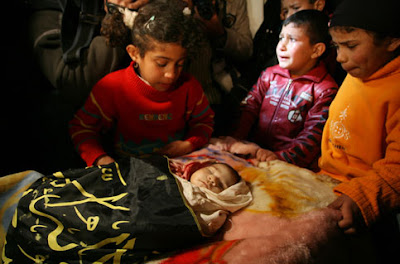 ".....But confirming their status in the eyes of the "international community" as less than complete human beings, neither Amira's killing, nor any of the dozens of Palestinian civilian victims of Israel's onslaught in Gaza have merited condemnation or condolences.......

We cannot expect much analysis in the media of why the Mercaz HaRav yeshiva might have been chosen as a target. Was it mere coincidence that the school, named for Rabbi Abraham Isaac Kook, and led after his death by his son Rabbi Zvi Yehuda Kook, is the ideological cradle of the militant, Jewish supremacist settler movement Gush Emunim? 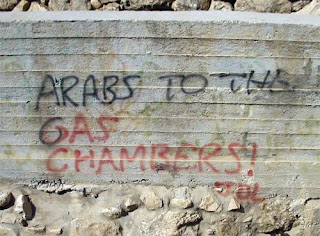 Unlike other sects in Israel which sought exemption of their students from military service, Gush Emunim encouraged its followers to join the army and become the armed wing of religious nationalist Zionism. Gush Emunim settlers, many of them, like Moshe Levinger, graduates of Mercaz HaRav, founded the most extreme and racist settlements in the Occupied West Bank, including the notorious colonies in and near Hebron whose inhabitants have made life miserable for Palestinians in the city and forced many of them out of their homes. It is the militant settlers of Gush Emunim who still honor Baruch Goldstein who murdered 29 Palestinians in Hebron in February 1994. It is in Hebron that the Gush Emunim settlers spray "Arabs to the gas chambers" on Palestinian houses.........

In 2002, Israeli army chief Moshe Yaalon declared that "the Palestinians must be made to understand in the deepest recesses of their consciousness that they are a defeated people." This would be achieved by the massive and constant application of force until they got the message. The same philosophy was elaborated in 2004 by Professor Arnon Soffer, one of the architects, with former Israeli prime minister Ariel Sharon, of the 2005 Gaza "disengagement."

Soffer, an avid supporter of turning Gaza into a hermetically-sealed pen for unwanted Palestinians, explained that if Palestinians fire a single rocket over the fence into Israel, "we will fire 10 in response. And women and children will be killed, and houses will be destroyed. After the fifth such incident, Palestinian mothers won't allow their husbands to shoot Qassams [rockets], because they will know what's waiting for them." 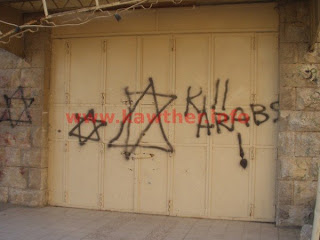 Soffer predicted that in a few years' time, "when 2.5 million people live in a closed-off Gaza, it's going to be a human catastrophe. Those people will become even bigger animals than they are today, with the aid of an insane fundamentalist Islam." With Palestinians closed in, "The pressure at the border will be awful," Soffer predicted. "It's going to be a terrible war. So, if we want to remain alive, we will have to kill and kill and kill. All day, every day." ........

For decades Israel has been exercizing with ever-escalating brutality this deliberate strategy to crush through force and starvation a civilian population in rebellion against colonial rule. To Israel's vexation, the Palestinians are not playing their part. After sixty years of expulsions, massacres, assassinations of their leaders, colonization, torture, and mass imprisonment, the Palestinians have utterly failed to understand that they are a "defeated people." ......"
Posted by Tony at 4:38 AM