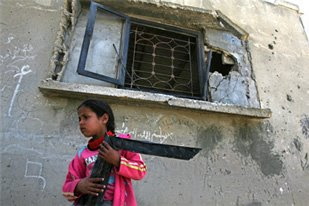 "A new report has said that the humanitarian crisis in Gaza is at its worst since Israel seized the territory in 1967.

The study released on Thursday was conducted by a coalition of eight British-based human rights organisations, including Amnesty International and Save the Children.

The report found more than 80 per cent of Gaza's 1.1 million population are now dependent on food aid.

Unemployment has risen to 40 per cent after around 70 per cent of the 110,000 workers employed in the private sector lost their jobs.

The report comes just days after a spate of Israeli raids left more than 120 Palestinians dead.

It also said that hospitals are suffering from power cuts of up to 12 hours a day, and the water and sewage systems were close to collapse, with 40-50 million litres of sewage pouring into the sea daily.

The organisations called on Israel to end its blockade of Gaza and for both sides to cease cross-border attacks.....

Kate Allen, the UK director of Amnesty international said: "Israel has the right and obligation to protect its citizens, but as the occupying power in Gaza it also has a legal duty to ensure that Gazans have access to food, clean water, electricity and medical care.

"Punishing the entire Gazan population by denying them these basic human rights is utterly indefensible. The current situation is man-made and must be reversed."....."
Posted by Tony at 4:37 AM