Freedom of Speech: the right to equate Gaza with Auschwitz 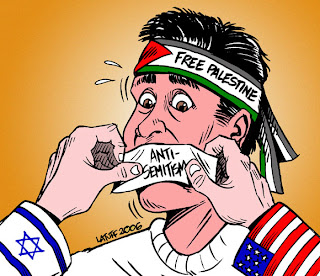 ".....Auschwitz Versus Gaza in the light of Political Correctness

We tend to agree that marginal discourses should be protected by the offence principle, so the marginal subject maintains his unique voice. We obviously agree also that such an approach must be applicable to the manifold of Jewish marginal discourses (religious, nationalist, Trotskyite, etc.). Seemingly, Jewish political lobbies want far more than just that, they insist upon delegitmising any intellectual reference to current Jewish political lobbying and global Zionism. As if this is not enough, any reference to modern Jewish history is prohibited unless kosherly approved by a 'Zionist’ authority. As bizarre as it may be, the Jewish Holocaust has now been intellectually set as a meta-historical event. It is an event in the past that won’t allow any historical, ideological, theological or sociological scrutiny.

Bearing in mind the offence principle, Jews are entitled to argue that any form of speculation regarding their past suffering is "offensive and hurtful". Yet, one may demand some explanations. How is it that historical research that may lead to some different visions of past events that occurred six and a half decades ago offends those who live amongst us today? Clearly, it is not an easy task to suggest a rational answer to such a query.

Plainly, historical research shouldn’t cause harm or an offence to the contemporary Jew or any other human subject around. Unless of course, the Holocaust itself is utilized against the Palestinians or those who are accused as being the 'enemies of Israel’. As we learn from Matan Vilnai recently, the Jewish State wouldn’t refrain from bringing a Shoah on the Palestinian people. The Israelis and their supporters do not stop themselves from putting the holocaust into rhetorical usage. Yet, the Jewish lobbies around the world would do their very best to stop the rest of us from grasping what Shoah may mean. They would use their ultimate powers to stop us from utilizing the holocaust as a critical tool of Israeli barbarism.

Hence, I would argue as forcefully as I can that political correctness is the bitterest enemy of human liberty and those who regulate those social axioms and plant them in our discourse are the gravest enemies of humanity.

I would argue as forcefully as I can that since the Palestinians are facing Nazi-like State terrorism, the holocaust narrative and its meaning belongs to them at least as much as it belongs to the Jews or anyone else.

I would argue as forcefully as I can that if the Palestinians are indeed the last victims of Hitler, then the holocaust and its meaning do belong to them more than anyone else.

Bearing all that in mind, equating Gaza with Auschwitz is the right and only way forwards. Questioning the holocaust and its meaning is what liberation of humanity means today and in the near future."
Posted by Tony at 9:46 AM