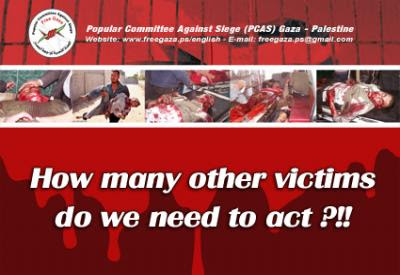 "Popular Committee against Siege (PCAS) and part of its endless actions in Gaza and abroad is launching more actions to free the Gaza Strip.

In Gaza Strip, the siege is still ongoing but with more harshness. Siege infiltrated in all aspects of ordinary life people. Most of medicines, milk sorts, basic food stuff and human needs are not available...and if not available it will be few with high prices.

More patients are dying... and the number is over 100 now. About 150.000 workers are jobless now...What's lift for their families! How can they feed their starving children? About 83% of innocent civilians are living under poverty line. Power blackout is still continuing and Gazans are deprived the light!

More number, statistics and shocking facts exist in Gaza Strip. Thus, PCAS is calling for another series of Actions across Asia, Afirca , Europe and the Two Americas:

Friends, brothers, sisters and lovers of freedom in this world; Share us the liberation of Gaza as our big martyr Rachel Corrie did before.

Be on the time and participate in 3 days of actions for Gaza, 14th Friday, 15th Saturday, and 16th Sunday of the next March. Sunday will be also the occasion to commemorate the 5 th anniversary of Rachel's death who has been was killed by Israeli Occupation in Rafah City.....

We're not asking for you to sacrifice your life as Rachel did, but perhaps a little of your time. Let's hit the streets for Gaza and Rachel......"
Posted by Tony at 5:54 AM