'US plot against Hamas' revealed 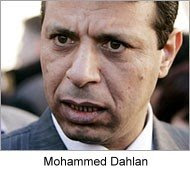 "Documents that appear to show that the US attempted to overthrow the Hamas-led Palestinian government have surfaced.

One of the documents from March 2007 details a plan to oust Hamas by force and instal the rival Fatah movement in power, by supporting fighters from the group with weapons and money.

In Cairo, Condoleezza Rice, the US secretary of state, said she had not read the report which appeared in Vanity Fair magazine.

However, she justified the arming of Fatah, saying the situation called for it......

Evidence showing the US sought to remove Hamas in a coup dates back to 2006, after the group had come to power through Palestinian elections.

A memo sent to Fatah officials, apparently by a senior US diplomat in Jerusalem in November 2006, stated: "If Hamas does not agree [to accept a new government] within the prescribed time, you should make clear your intention to declare a state of emergency and form an emergency government explicitly committed to that platform." The memo was not labelled with official US stamps or seals.

However, Mahmoud Abbas, the Palestinian president, did not follow the plan. Rather he formed a unity government with Hamas in early 2007 after continued fighting between the rival factions in the Gaza Strip.

This failure by the US appears to have led to the second document and the plan to oust Hamas by force.

It appears that the US sought to bolster Mohammed Dahlan, the head of Fatah's security forces.

Yet, this too failed as inter-faction fighting broke out in the Gaza Strip and Hamas took control.

Evidence suggests that Hamas was forced to act in order to pre-empt the US plot.

Fatah security forces were trained in Jordan and Egypt, from where they are sent to work in the Gaza Strip.

Nour Odeh, Al Jazeera's correspondent in Ramallah, said that many Palestinians would be upset that Fatah appeared to have played into the hands of an American foreign policy that wanted to make an example out of Hamas, whom the US labels a "terrorist" organisation.

There has been no official response from Abbas."
Posted by Tony at 5:50 AM