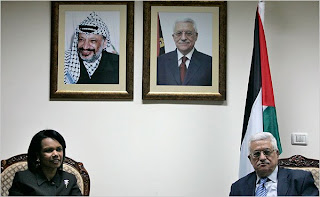 A Very Good Piece
By Tony Karon
".....Condi Rice is sticking doggedly to that script, even though all the other players are making clear that the game is up. The New York Times tells us, for example, that U.S. officials are worried that efforts to broker a cease-fire to end the carnage in Gaza might undermine Washington’s priority, which is not to restore peace, but to isolate and eliminate Hamas: “Ms. Rice wants to avoid the word ‘cease-fire’ because administration officials believe that a negotiated cease-fire between Israel and Hamas — which the United States and Israel view as a terrorist organization — would legitimize Hamas in the eyes of the Palestinian people,” the Times reports. “The fear, administration officials said, is that a negotiated cease-fire would likely undermine Mr. Abbas and make it look like Hamas is the entity with which Israel and the West should be negotiating, and not Mr. Abbas.”
Ah. Cease-fire talks would “legitimize” Hamas in the eyes of the Palestinian people. Right. That would be the Palestinian people who, in a democratic election voted Hamas candidates into 56% of the seats in the Palestinian legislature. Their legitimacy in the eyes of the Palestinian people is well-established. (And just look how much talking to the Americans has done for the legitimacy of Mahmoud Abbas!) A cease-fire would “make it look” like Hamas is the entity with which Israel and the West should be negotiating? What planet are these U.S. officials on? What’s the point of peace talks if they don’t involve the party that, on the Palestinian side, is doing most of the fighting? Mahmoud Abbas commands no forces currently fighting Israel, so, simple logic would dictate that the Palestinian entity with whom a truce will have to be negotiated will have to be Hamas. You know, like, duh!.....
Nor is the current standoff in Gaza a crisis that simply crept up on the Bush Administration; it was a situation created by the failed coup attempt authored by the U.S. last June in the hope of reversing the decision of the Palestinian electorate.
Last May, already, alerted by materials that were surfacing in the blogosphere and the Middle Eastern press, I wrote a post (linked here to a copy from another site, because it got stuck in my migration from one server to another — recovery efforts are underway!) about the coup plan that would have U.S.-backed strongman Mohammed Dahlan topple the elected government. I followed up last June, once the coup had failed, with a piece that concluded......
The nuts and bolts of that disastrous coup attempt, authored by Condi Rice and Elliot Abrams, is now the subject of an outstanding investigative piece in Vanity Fair. David Rose’s piece, based on confidential documents and U.S. and Palestinian sources provides a gripping account of the U.S. effort to reverse the result of an election it had demanded. (My favorite part is how Condi issues orders to Abbas, instructing him to dissolve the elected government, and giving him two weeks in which to do it, settling for four when he asks for more time; then sending an emissary to scold him when he hasn’t met her deadline… And they think talking to Hamas is going to erode this man’s legitimacy! The man has lost most of his legitimacy even within the ranks of Fatah precisely because of the nature of his relationship with the Americans, which Rose reveals in great detail.)......"
Posted by Tony at 8:33 AM