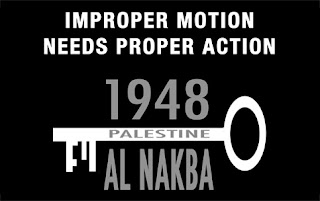 "So much for the new Australian government taking an even-handed position on Israel-Palestine. Before our politicians even warmed their seats in the new parliamentary sittings, Australian Prime Minister Kevin Rudd announced that he will lead a parliamentary motion to honor Israel on 12 March acknowledging Yom Ha'atzmaut, Israel's Independence Day. The opposition leader will second the motion. Then, celebrations will take place at a reception in the Mural Hall of Parliament House.

If Palestinians and their supporters had any hopes of a sympathetic hearing from the new Rudd government on the multiple human rights abuses being perpetrated by Israel in the Occupied Palestinian Territories, those hopes are now dashed.

This year marks 60 years of Palestinian dispossession and displacement and a savage, relentless occupation that is smothering the lifeblood of the Palestinians while Israel celebrates its ill-gotten gains. Palestinians are starving in Gaza, Palestinians are being sold out in the West Bank, Palestinians are dying. Their very existence is under threat. It is as simple and as awful as that......"
Posted by Tony at 4:12 AM